Home » “Riders Of Berk: Dangers of the Deep” Sets Precedent For Hiccup As Chief In How To Train Your Dragon 2 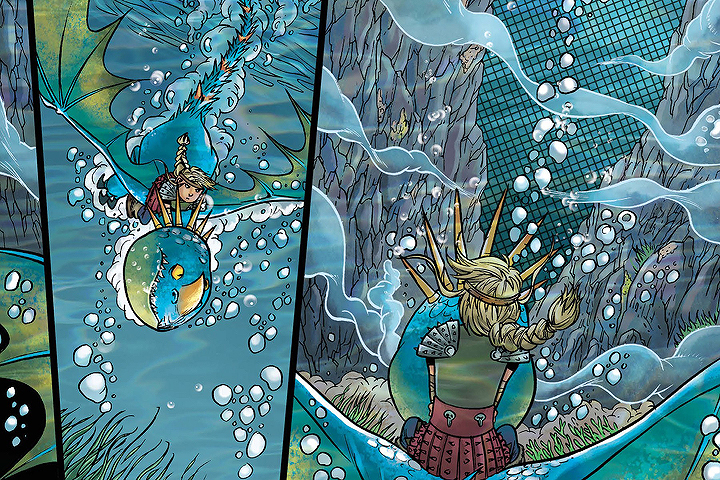 Simon Furman and crew are back again with a new installation to the Dreamworks Dragons comic series. In Riders of Berk: Dangers of the Deep, the adults of Berk leave to solve a fish problem. The kids stay and Stoick appoints Hiccup in-charge. But no one listens to our thin, one-legged dragon rider! So, distraught, he gives up trying. This sets the stage for Hiccup’s struggle with leadership and chiefdom, and creates a good precedence for the events of How to Train Your Dragon 2 where Hiccup paces over the idea of himself becoming chief. Of course, it’s not a Dreamworks Dragon story if there’s no Alvin the Treacherous scheming to takeover Berk. Unlike the previous issue, Dangers of the Deep is more action-packed. There are also a lot of parallels higlighted between Stoick and Hiccup as leaders.

This issue calls back a lot to the main series, even more so than Riders of Berk: Dragon Down. They face similar problems of winter coming, no storage of food and people blaming dragons. This obviously refers to the beginning of the first film where Stoick yells “Winter’s almost here and I have an entire village to feed”. Instances such as this also come up in episodes like ‘How to Start a Dragon Academy’ and ‘Animal House’. Adding to the subplot of Hiccup as chief; Stoick once again burdens Hiccup with tasks he’s not yet fully prepared to take onboard. This is a physical gesture in which Stoick lays his heavy hands on Hiccup’s shoulders. Perhaps this is a metaphor for the heavy weight of the world. Stoick tends to do this in the most inconvenient of episodes such as in ‘Midnight Scrum’.

Other more lighthearted continuities include the same tone of narration at the beginning of the issue. Hiccup calls Berk “a bit of rock on a large ocean”. This again calls back to his narration in How to Train Your Dragon 2 in which he describes Berk as: “This wet heap of rocks packs more than a few surprises”. There’s also the constant dry sarcasm present in both Gobber’s remarks to Stoick and the twins pointing out the obvious. Iwan Nazif has a way of making Gobber look innocent and oblivious to his own responses. But he also adds a mischievous flare to the expressions of Tuffnut and Ruffnut. Of course, this issue ends with another stock from the series; Stoick’s signature yell of Hiccup’s name.

There are differences that help enhance the story. First is Mildew and his unexpected help. It’s nice to see him face off against Alvin prior to joining the Outcasts. He also shines in his traditional Vikings sense as he wrangles disobedient kids into battle. This makes his act of helping Hiccup in Defenders of Berk all the more redeemable. It’s also weird to see blood drawn from actual dragons. But it’s the reality of the Viking life that both the TV series and films try to censor. Dangers of the Deep may also be the first time the series has explicitly expressed a no-harming humans policy. This is a policy usually reserved for dragons. But in here, Hiccup addresses it by enforcing that they “target the ships not the men”. Of course, not all changes are good with a continuity error in calling ‘Alvin the Treacherous’ as ‘Alvin the Terrible’.

Art is always a marvel when it comes to the Dreamworks Dragons franchise. For example, the mob children’s designs are all fun and unique with plenty of personality. Even though they don’t get much screen time, it’s still a wonderful detail to take note of. There are also the arrangement and layouts. Stoick looks assertive as ever; framed on top of several boxes and panels to really hammer in home his imposing figure. The parallel scenes of he and Hiccup recall the How to Train Your Dragon scene in which Hiccup overlooks his dad leaving to find the nest. It’s these little nuances in the arrangement and art that truly make Danger of the Deep a compelling issue. Other notable features include fantastic use of shadows and silhouette work. There’s also the illustration of wind and action, and the dragons’ facial expressions.

The color palette for this issue is more vibrant, and stays slightly on the warmer side. There’s a lot of red for destruction and adventures with the children. This contrasts to the neutrals and blues faced by the adults at sea. In Hiccup’s case, the more he realizes what he needs to do, the more the palette turns neutral. There might only be single and bi colors used for each dragon. But the shots of all of them together showcases each dragon’s unique design and color blend. This makes them recognizable enough, but stays in synergy with each other as a collective. Like the TV series, they’ve lightened Toothless from a midnight black color to something akin to a teal and blue-ish tint. As a result, he remains in color and tone harmony with the rest of his surroundings.

Dangers of the Deep excels as a continuation to the Riders of Berk comic story. It helps set precedent for Hiccup’s leadership issues in How to Train Your Dragon 2 – even calls back references to how children don’t listen to anyone – and further expands the world of the franchise. If each and every read is like this for Dreamworks Dragons, then I never want any of it to end.

We’re reviewing every single comic from the Dreamworks Dragons series every month in anticipation for the How to Train Your Dragon 2’s ten-year-anniversary. If you love animation and dragons, miss this 2010 classic, and want more of the dragon riders; you may want to check back in every now and then for the rest of the series! You can pick-up a copy of Dangers of the Deep on Titan Comics or Waterstones. It’s collected alongside the rest of the issues in the Riders of Berk title. Let us know what you think of Dreamworks Dragons on our Instagram or Twitter!